On the surface this seems like a harmless question….but if you have asked a similar question of a new mother then I want you to know it's not harmless, it's not well meaning, it's not acceptable. 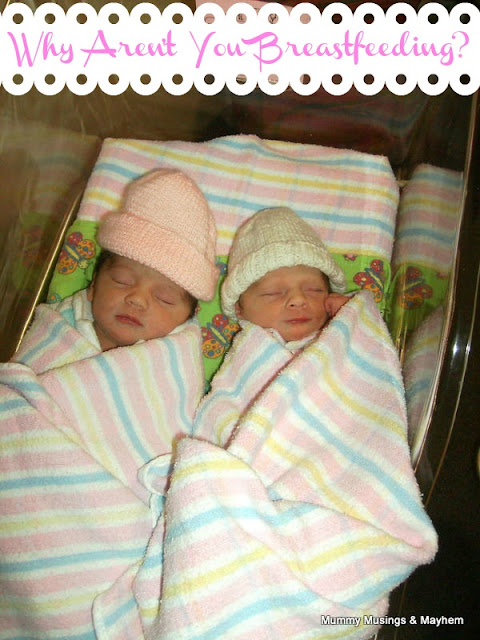 The reason I mention this now is that last week a friend of mine had a most unpleasant experience when out shopping with her 3 week old bubba. It was the first time she had been out since having him and she was congratulating herself on actually getting out the front door and not dissolving into tears due to the stress of this simple task .

Her little one had been having a lot of trouble breastfeeding and although she was still pumping milk at home she had also made the difficult decision to bottle feed as well. I know it was a difficult decision as I was the one who wiped away her tears and hugged her as she described feeling like a failure as a mother.

On this day she was feeling so excited to have achieved an outing….it wasn't exciting and she didn't really have a plan…she just wanted to feel like a ‘real' Mum out with her baby…a Mum that had managed to brush her hair, slip on some lipstick, get baby and all that accompanies such a little person in and out of the car and into the big wide world. She was proud, she felt good for the first time in weeks, she felt like a Mum that was tired but conquering the scary road of new motherhood….and then she heard those words that I had heard so many times before….

“Why aren't you breastfeeding?”

She had stopped on a bench tucked away in a corner of the large shopping centre and began to feed her hungry baby…with a bottle. The woman holding onto a bright eyed toddler had sat down beside her and casually asked this most private of questions…to a complete stranger!
Why am i talking about this now? Because when I heard my friend describe this incident and how it had made her feel as a mother I was mad. Really mad…then really sad. I'd love to say this was obviously an isolated incident but it's not.
When I first began venturing out of the house with the twins I was still a bit of a mess. It was hard to get up the will to get everyone changed, dressed, fed and out of the house and into the car before it all had to start again. I was depressed, I was constantly in a state of guilt as again I hadn't been able to breastfeed and both girls had severe reflux…surely that was my fault due to this lack of skill as a mother too.
I'm not going to go into great detail about why I couldn't breastfeed….from personal experience I know that there will always be some who question whether I tried hard enough or whether I gave up to soon. Friends and family and my lactation consultant know how hard I tried and how i spent every moment on a double breast pump in between caring for twins because i was so determined that i would be able to feed and nourish my babies.
I had researched the best twin pillow….had poured through information in multiples forums and books, watched countless DVDs, hired experienced lactation consultants….said no to the hospital when they wanted to top up with formula in the special care unit as I had read that ‘was important to assert to staff' in one of the many pieces of expert literature i had memorised! So instead I let my babies scream in hunger and I became a bad mother all over again. I had failed with Miss Teen and I was a failure again.
In this state of mind and obviously a little tired i ventured out and when the girls just wouldn't settle even though it was earlier than their normal feed time I pulled out their bottles and began to feed them in their double pram.
I suddenly felt such joy and so proud that I was in this moment with my beautiful girls when a woman sat down wearing a baby and proceeded to breastfeed. I smiled at her, enjoying the moment we were sharing as new mothers…and then she said “I  have friends with twins that breastfeed…they won't touch the chemicals in formula you know” I was mortified and immediately began to justify myself to this stranger I had never met….”I have tried and tried, i am actually doing half formula and breast at the moment by pumping every chance i get, I'd love to be able to….blah, blah blah.
The need to justify myself was strong and all she said was “You just need to keep trying, it's a natural thing but so many people give up and turn to ‘artificial feeding' methods when they realise it's a bit more difficult than they expected”.
Yes that is pretty much a direct quote as it is burned forever into my guilty mummy psyche! I went home in tears and didn't go back out for a few weeks and even then it was only very short visits so I didn't need to feed the girls. If it was just the one comment I could have brushed it off  probably…but it wasn't. Over the next year I heard the following helpful gems….
“I hope there's breastmilk in those bottles the poor things!”
“I have a friend with triplets and she has managed really well to breastfeed them all….i can get her to call you if you want”
“You would spend a lot less money if you just breastfed”
“You should give it another try, your twins deserve that”
“Do you have any idea what is in formula these days?”

I could go on but it is just making me sadder as I remember those days. I just really wonder when it became so socially acceptable to question another mother's choices and parenting decisions. When did it become ok to judge and belittle a new parent in public? When did it become acceptable to presume you know the circumstances surrounding a mother's decisions?
It started when I became pregnant….everyone asked if I would be breastfeeding and if having a C-Section….total strangers everywhere I went. I just presumed it was because I was having twins and it was a little out of the ordinary so people felt justified with their curiosity….a little like the “Are they natural or IVF?” question.
But is it I wonder….my friend only has one baby and said she was asked if she would be breastfeeding quite a few times when pregnant too. Seems the logical next nosey step for many judgemental individuals is to question why you are using a bottle once you have had the baby!
I know there are more people out there that are supportive of other fellow parents rather than unsupportive but I really do fear that it is becoming more and more acceptable to judge those mothers that aren't breastfeeding (and it isn't ok to ask why they can't by the way) in our push to promote the ‘Breast is Best' message.
This is in no way a post about not supporting breastfeeding….I am still so envious of those that do and I still feel a little guilt everyday that I failed in this area as a Mum. I know breast is best…and I'm pretty sure the majority of parents do. But can we please stop judging those that can't or won't for reasons you are unaware of or need to know?
Can we just get to a place of supporting each other no matter how we are feeding and nourishing our babies?
Can we try and spread the word that incidents and offhand comments such as those experienced by my friend and I can be so very damaging to a Mothers' mental and emotional state?
Can we just look into the eyes of the babies we see when out in public and notice the pure love shining there for their mother…no matter how they are being fed.
Can we never use the term ‘artificial feeder' around a bottle feeding mother. We already understand that, we don't need an awful label.

Can we just try? What do you think?