I thought I would show you the fun the toddler twosome had recently painting and tracing their names.

Such an easy little activity but they really enjoyed the thrill of seeing their names at the end and I think the masterpieces turned out quite well…..they are now hanging in their rooms! 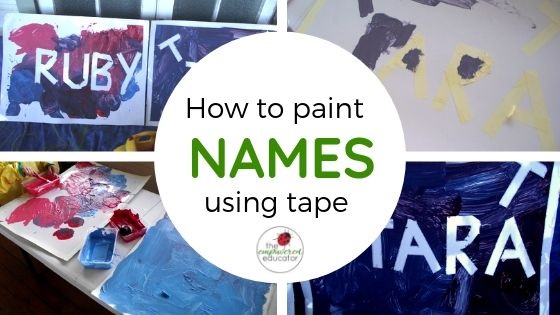 Daddy recently brought home some lovely shiny cardboard packaging from work and I decided they would make the perfect canvas for the girls to ‘paint’ their names. They are really interested in name and letter recognition at the moment so this was just a fun little activity to foster that interest.
You’ll note I haven’t used correct handwriting font or anything like that…this is a toddler activity just for fun and to help keep their emerging interest in letters and pre writing skills. 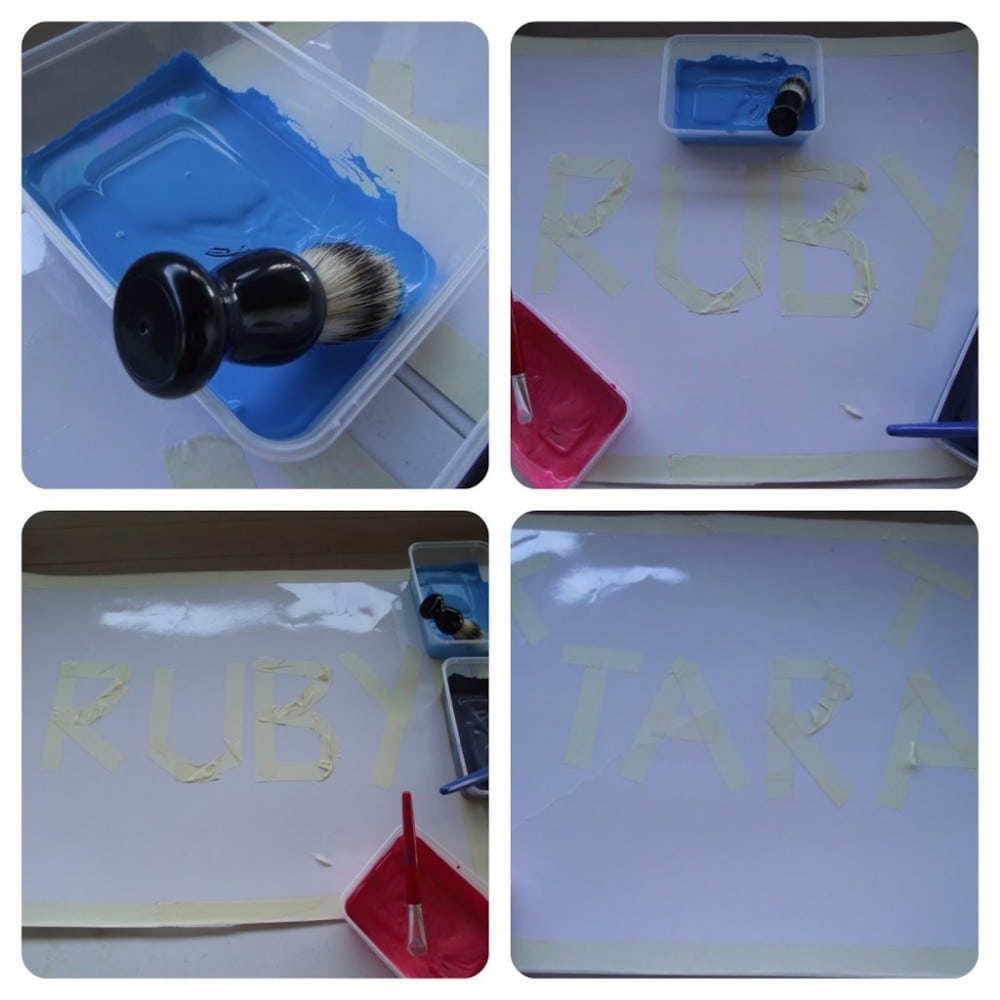 Using masking tape I roughly marked out their names in the middle of the card and then laid out some paint with brushes of varying thicknesses. I also taped around the edge to form a little border to give it that added ‘masterpiece’ feel!

The girls approached this activity in very different ways…Tara loved painting all the gaps first before trying to trace over the letters ….a difficult skill for this age so if you decide to give it a try just keep your expectations realistic…they are not meat to be ‘writing’ as yet! 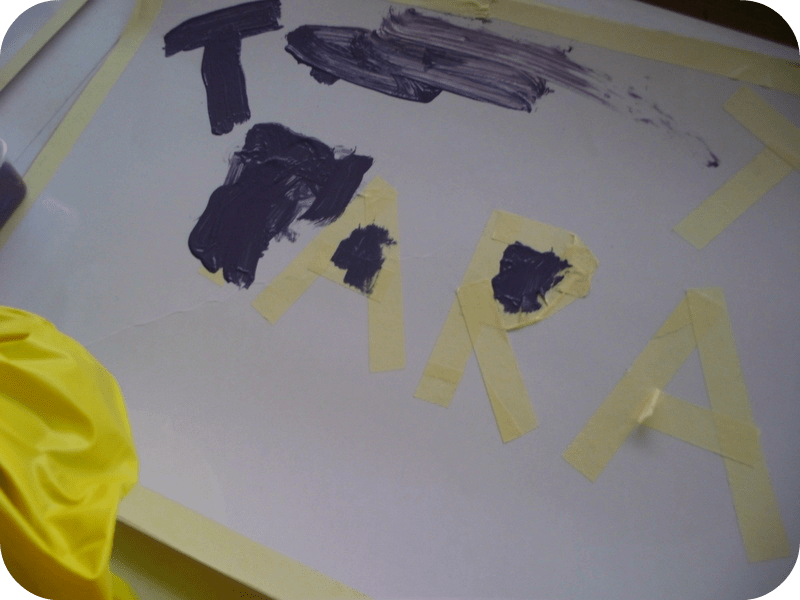 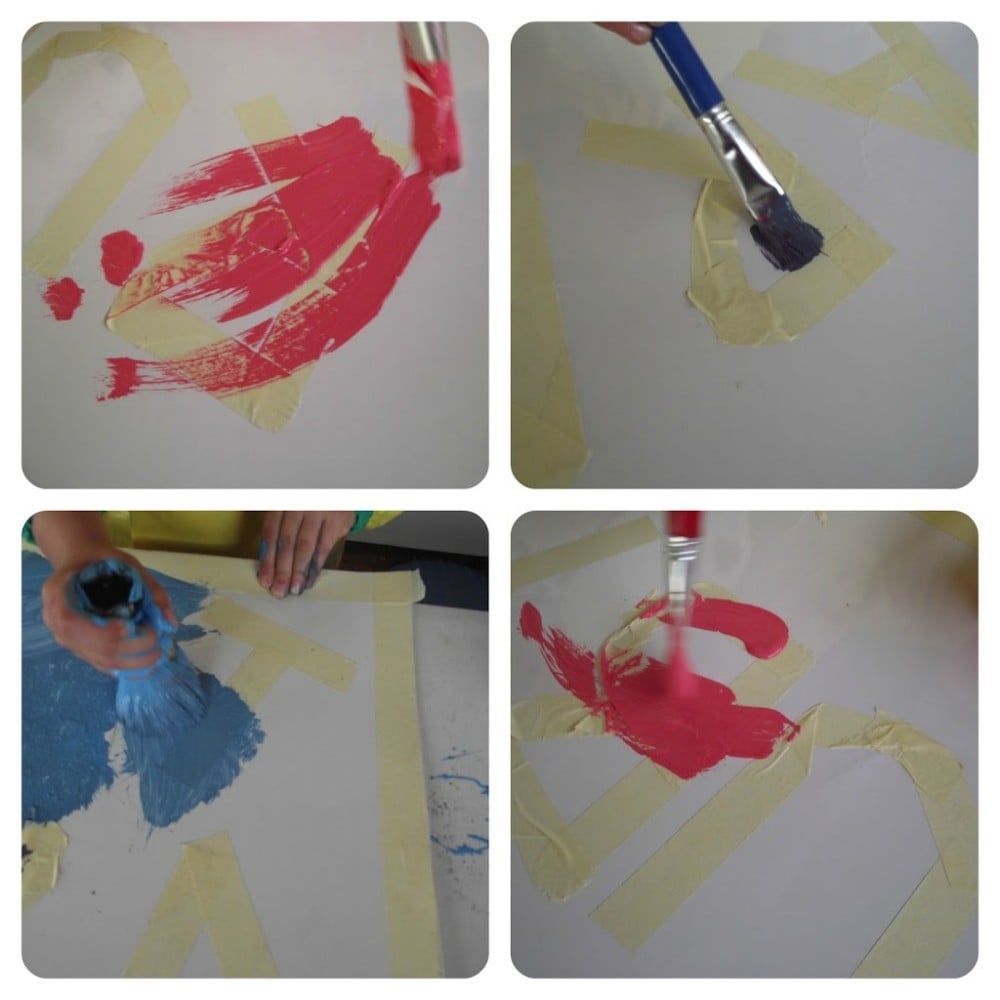 Ruby also tried to trace but soon turned her focus to just covering each piece of masking tape first. We talked about the letters they were painting and what colours they were using. 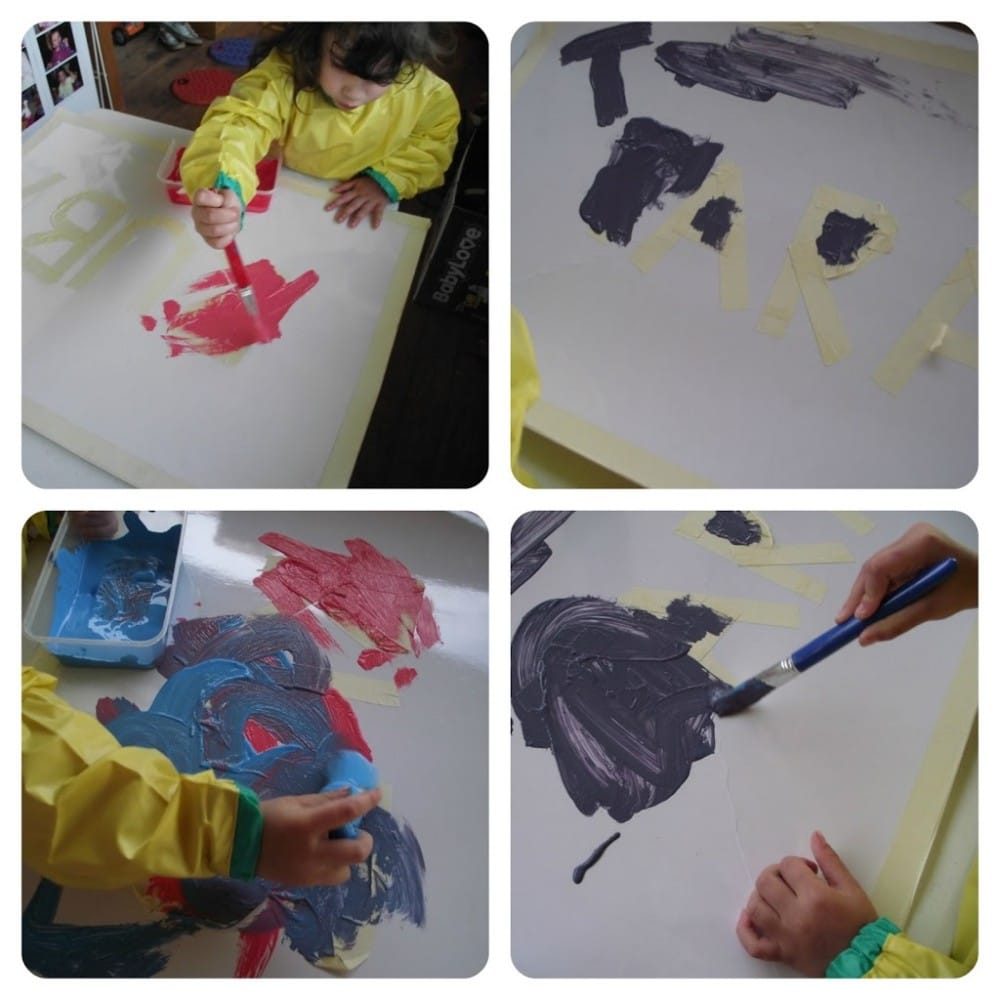 Tara focused on getting each letter covered well before moving onto the next one…. 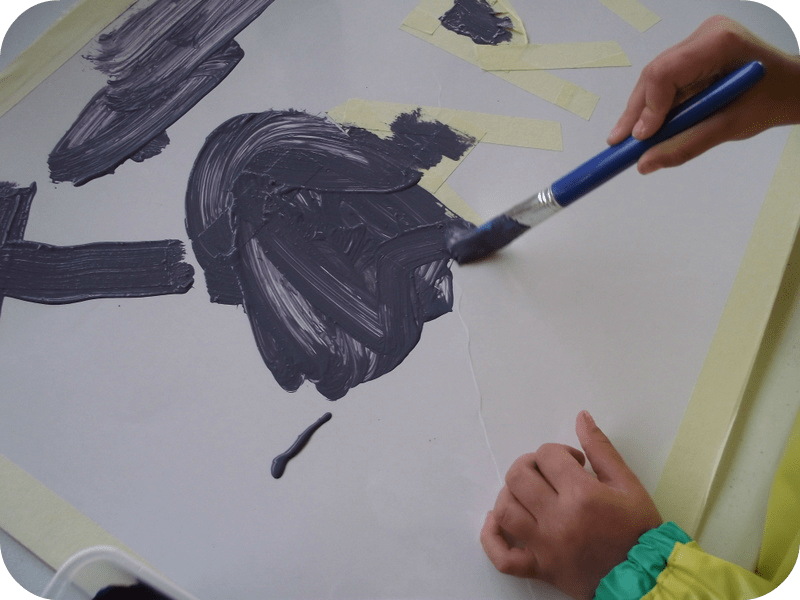 Then they both discovered the shaving brushes…I love using these brushes with toddlers, so easy for them to grasp and they can be moved around in different ways to a paintbrush…they soon realised that they could cover their letters a lot quicker with a bigger, thicker brush! 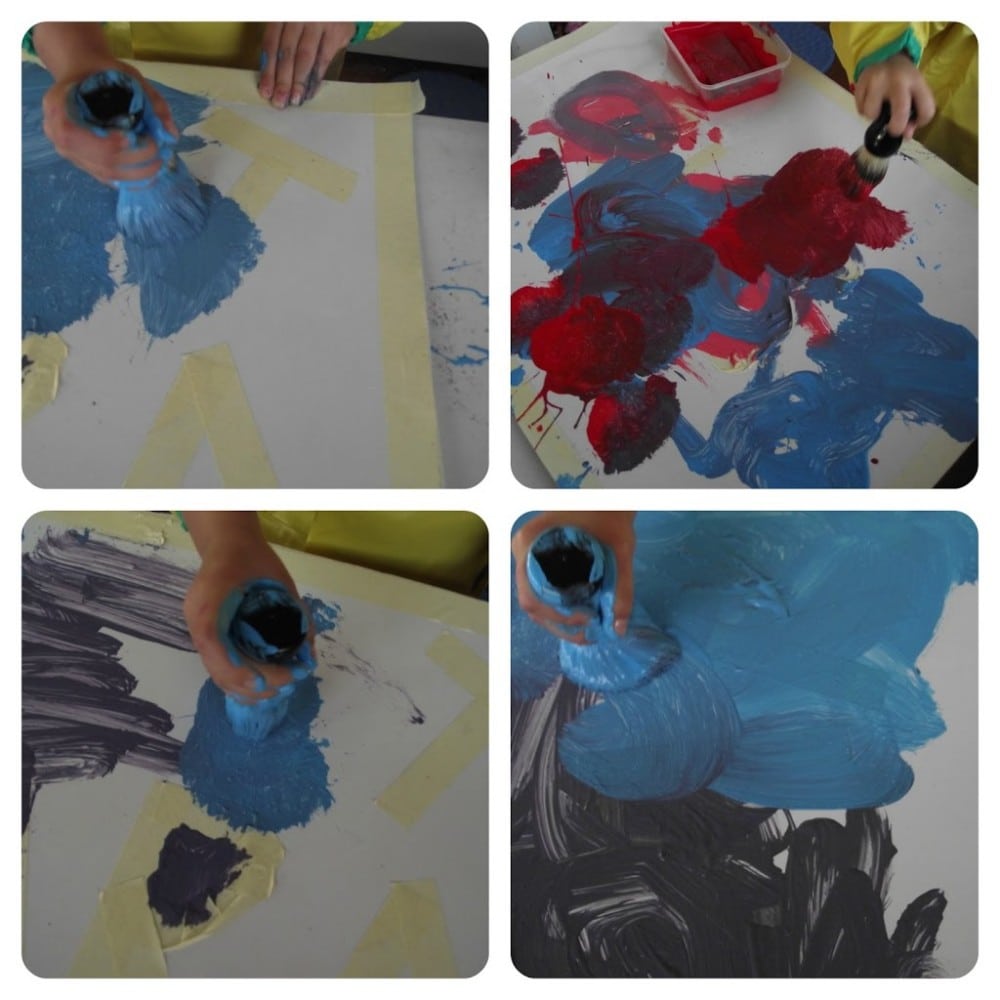 In the picture below you can see how the girls chose to create their masterpieces in a different way. Tara was very precise at first, she painted over all the letters and then proceeded to cover all of the white areas…and I do mean all…she was very specific!!
Ruby was more interested in mixing different colours and painting circles and lines as well as making splodges. She has been practising circle and line movements at early intervention recently and I can see her reviewing this skill when she participates in activities like this.
I didn’t encourage her to cover the entire piece of card to form a border…this is how she wanted to create and I think it’s important for parents/carers/educators to respect that when children are creating. It’s their art…not ours, so if it doesn’t look like we envisioned…it’s really not important! 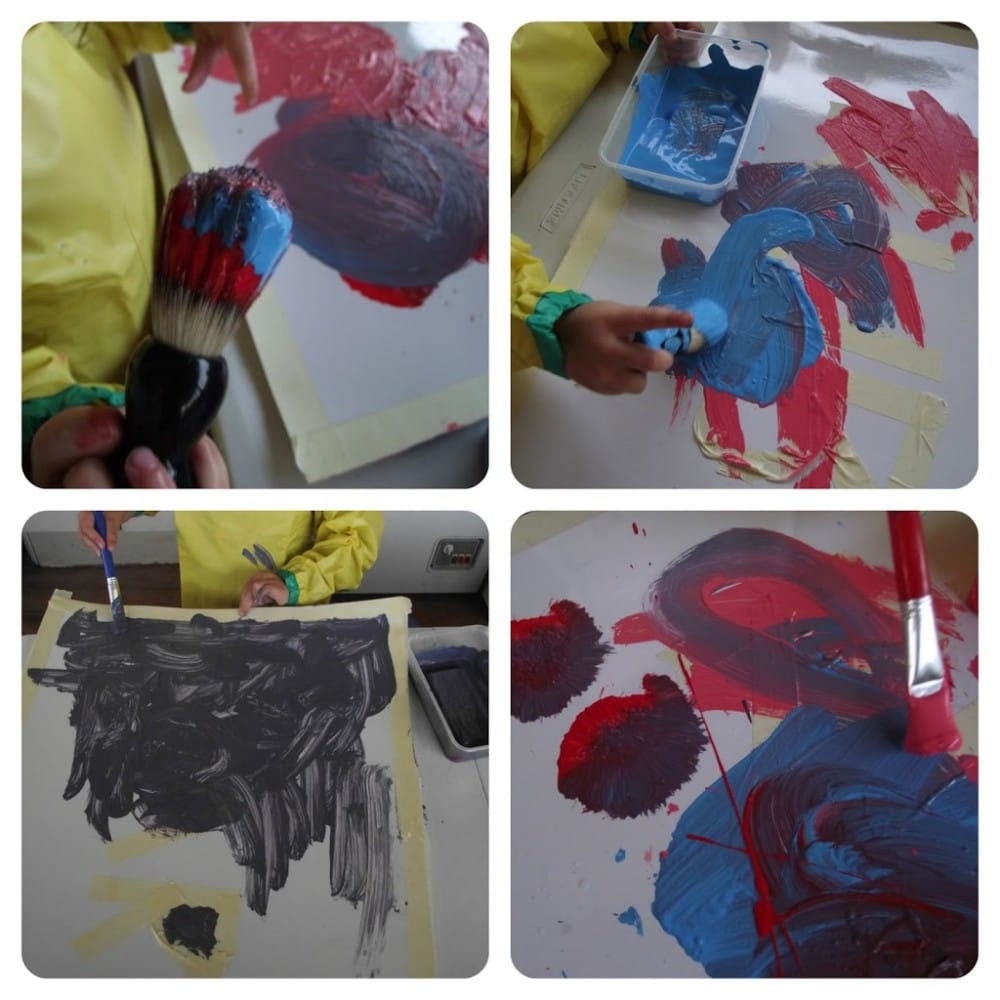 A little in awe of all that glorious paint and not quite sure whether to touch it or not at that stage…she still takes a little while before jumping in to messy, sensory type play this beautiful SPD girl or ours. 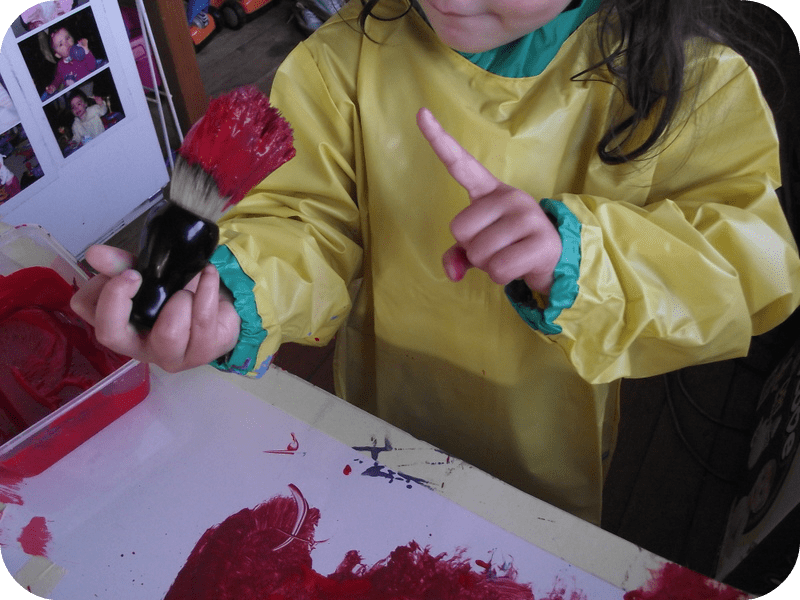 After making sure they had covered all of the tape (not a problem with Tara!!) I left it to dry in the sun for a day ….and it did take a full day to dry completely as they put enough paint on to cover a house I think!

I then peeled off the tape carefully…(the shiny surface of the card was very helpful with this!) and we stood back to watch the great reveal! 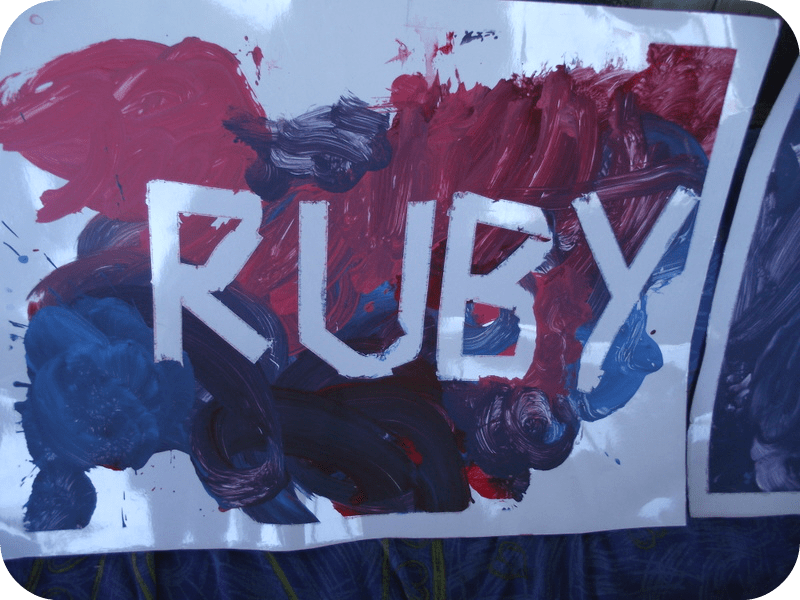 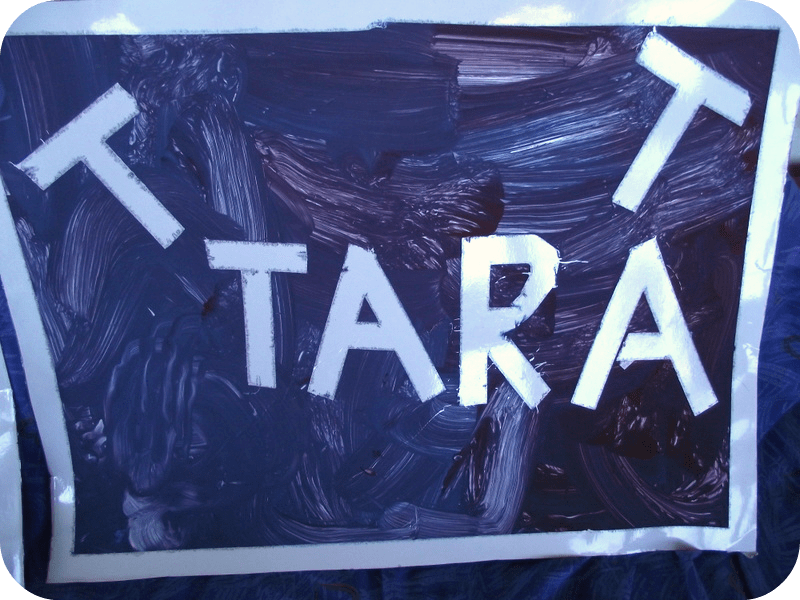 The toddler twosome were so excited and quickly began to start tracing their names with their fingers. A great opportunity to again talk about the letters, count the letters in their name and also use some fine motor skills!

I think they turned out rather special and they are still tracing over them as they play in their rooms where they are hanging with pride! 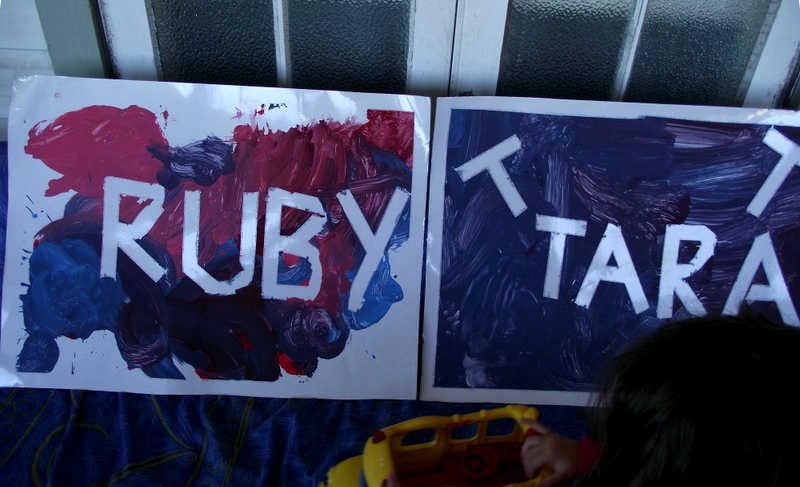 If you enjoyed this activity why not share a photo with us in the Empowered Educator Facebook Group?

Are you on Pinterest? Why not pin the image below to save for later. 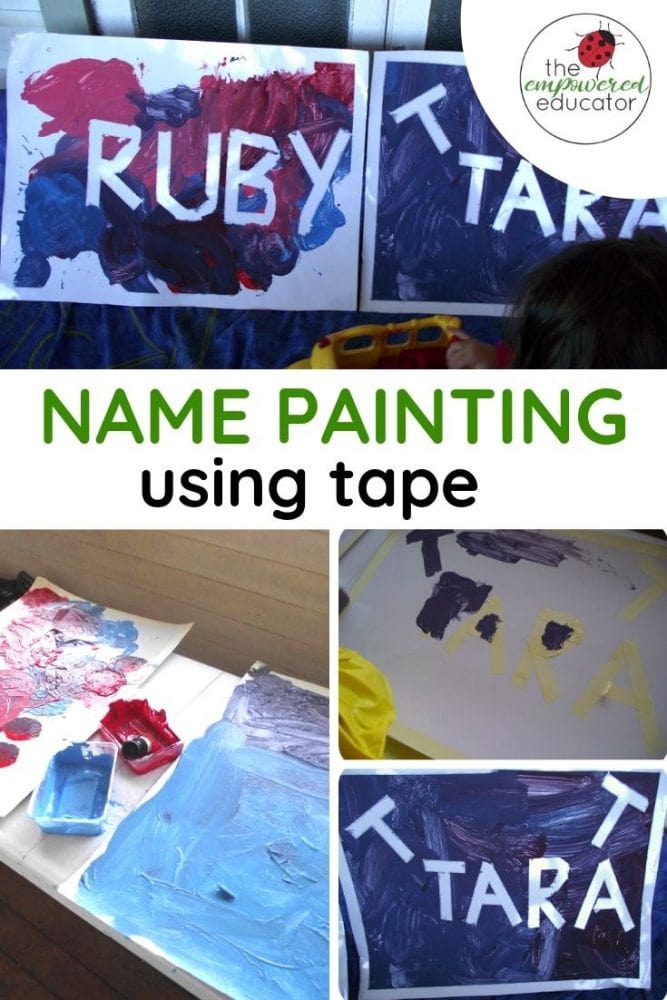