The toddler twosome have been a little under the weather and frankly I have been one tired Mummy because of it lately so I thought I would share one of our favourite sensory activities from a few weeks ago.
I really loved this activity…(mainly because it kept the girls busy for ages…but that doesn't sound like great parenting I know!)however, I also loved how many learning experiences we managed to gain from the one easy activity.
The activity kept evolving as I went along (my mind works in mysterious ways when it comes to play) but I originally started with a packet of cornflour (cornstarch) and added some of the toddler twosomes' (can I keep calling them that now they are 3?) favourite baking material of the moment, coloured balls.
They are in the baking section with 100's and 1000's and we use them to sprinkle on cookies. Very edible which is always a fun addition to sensory play.!
I put the flour into a large baking tray and let the girls sprinkle the balls on top. 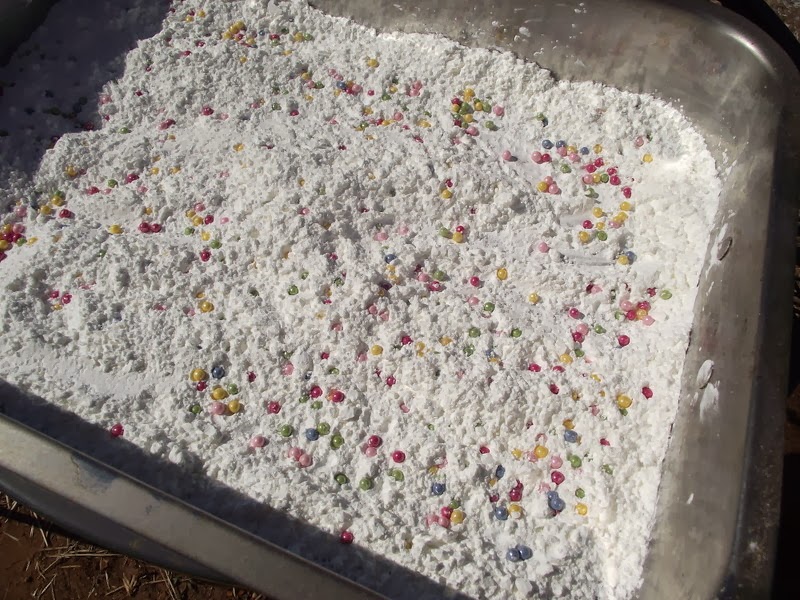 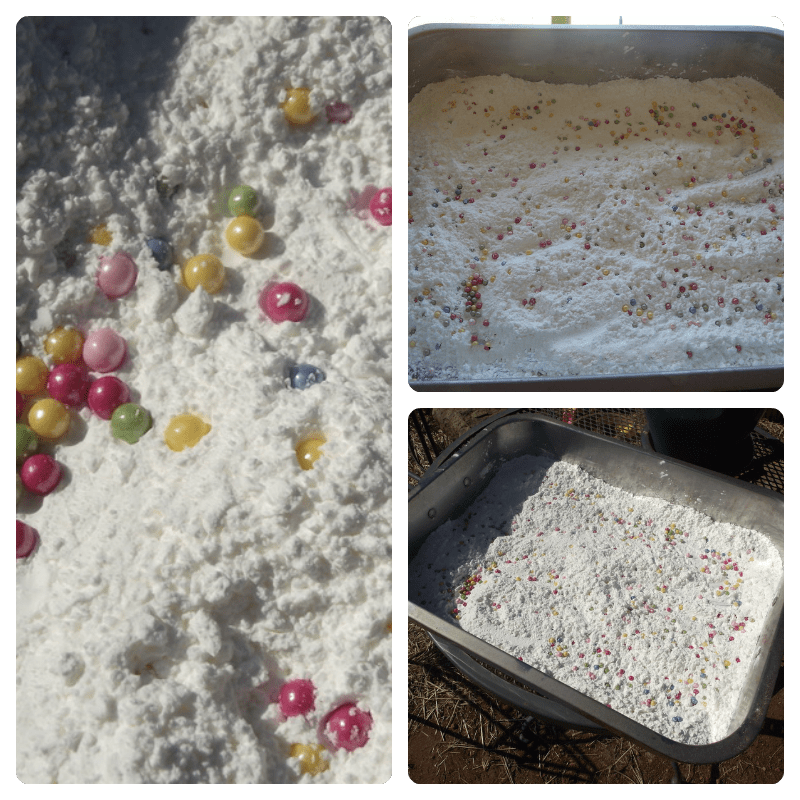 And then they dived in! I added a few scoops and then some larger cedar balls….a great prompt to discuss big and small. 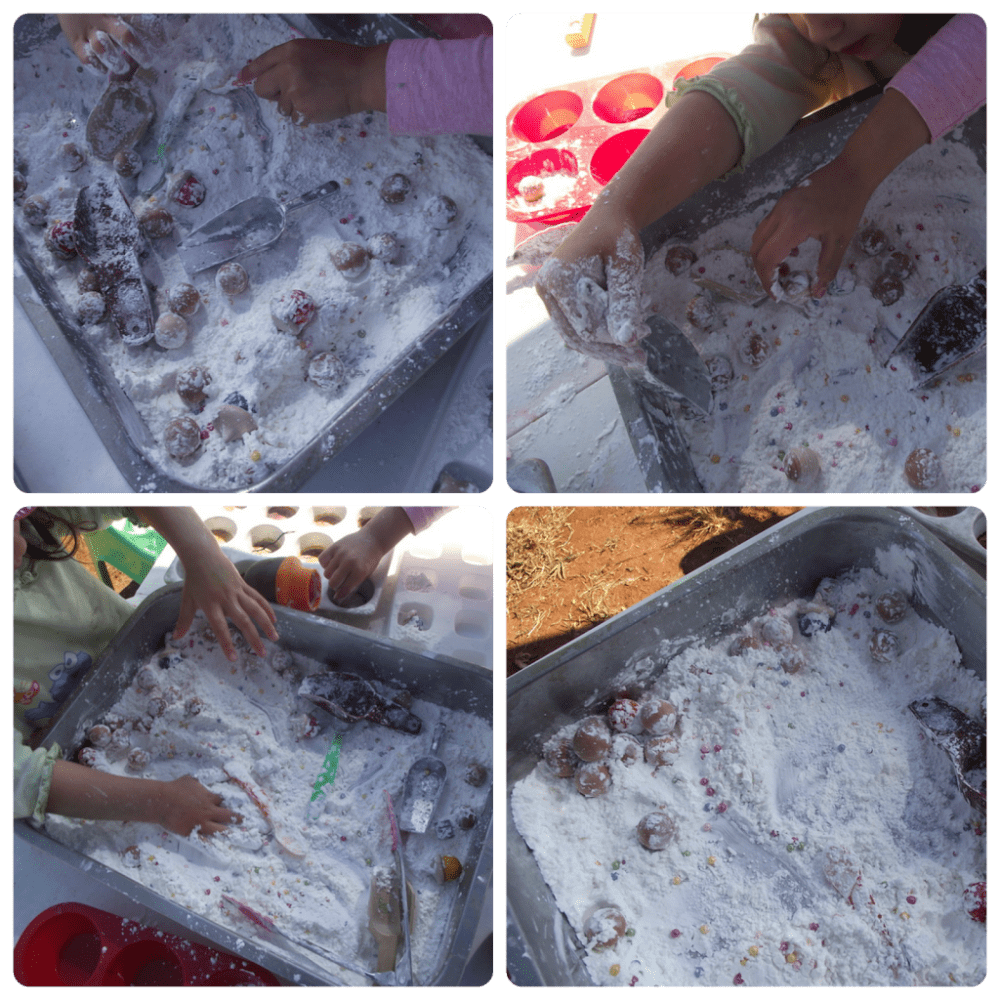 I then added some coloured acorns and we discussed how they were bigger still….Tara enjoyed lining them up by size while Ruby revelled in the texture of the cornflour rubbing it back and forth repeatedly. 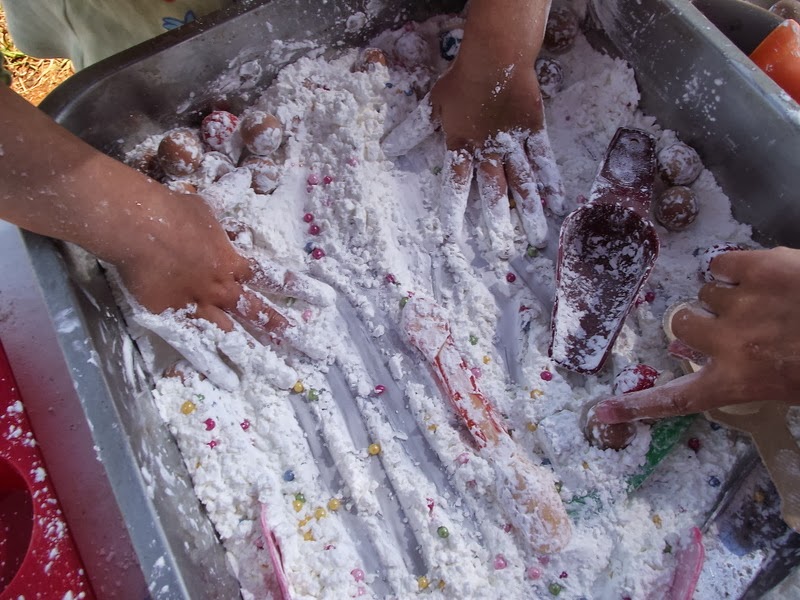 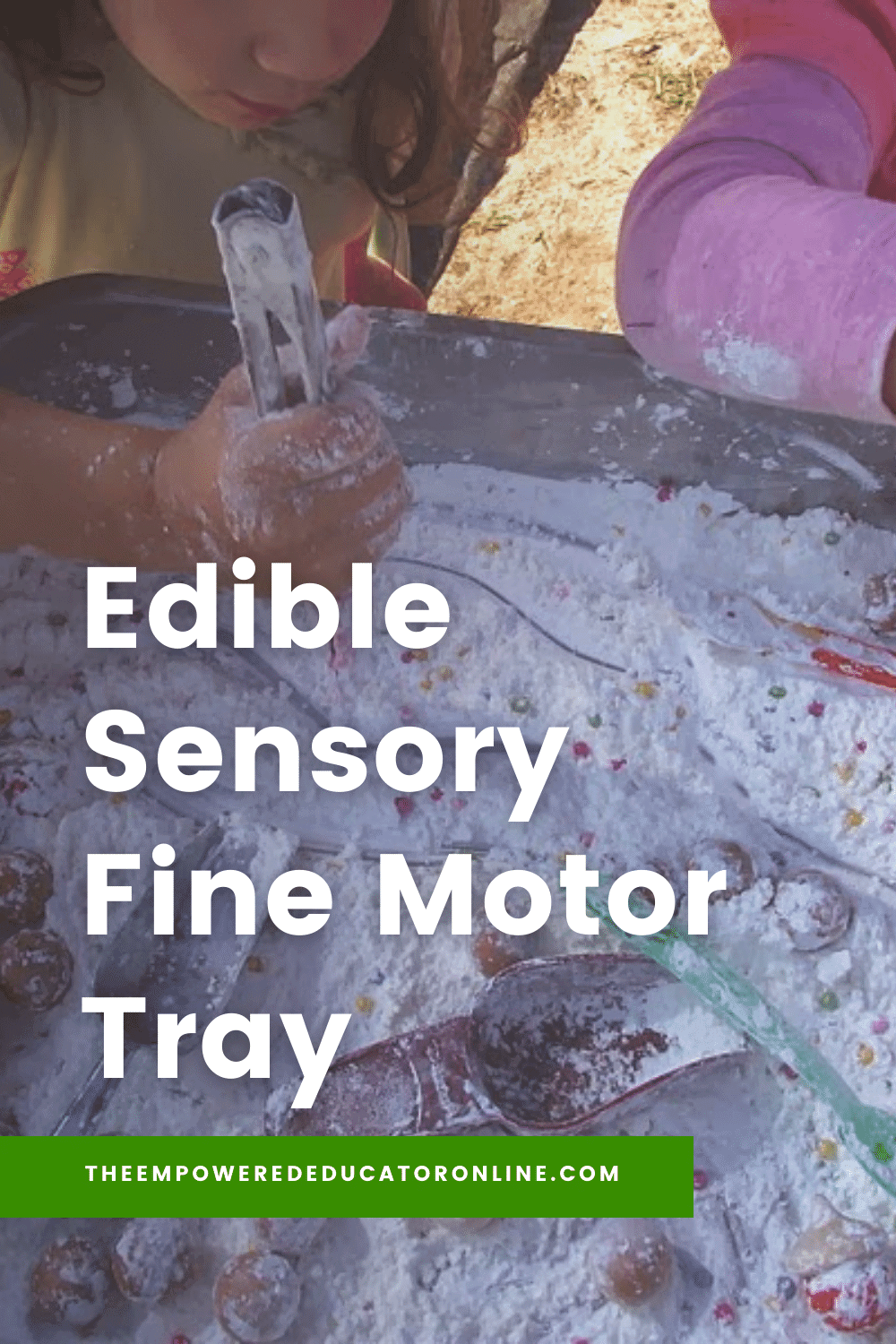 There was squishing, rubbing, sifting through fingers and much squeezing….. 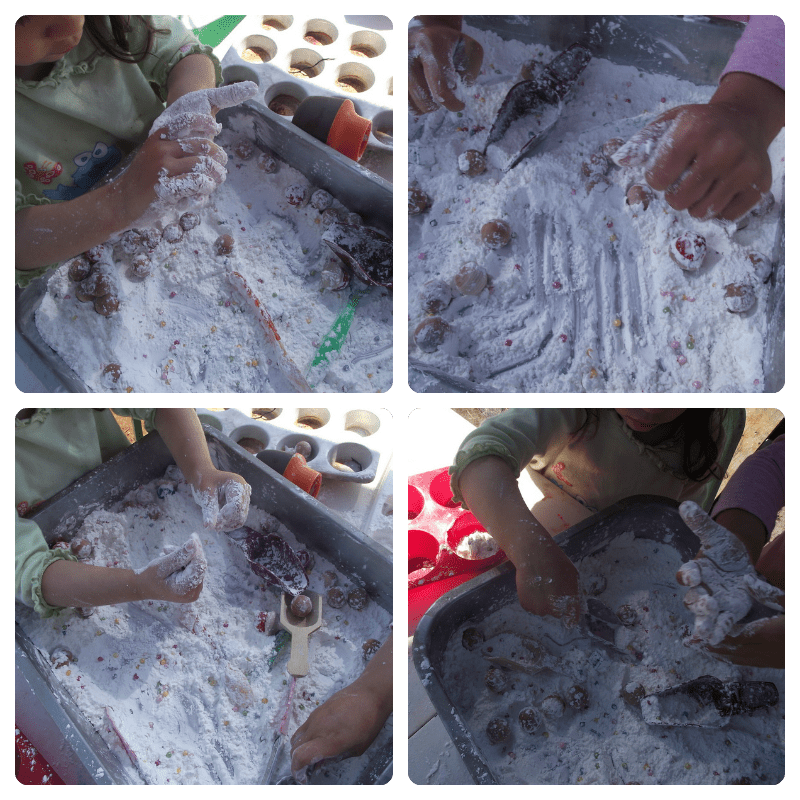 There were patterns to make with fingertips and tiny balls to bubble along underneath palms…. 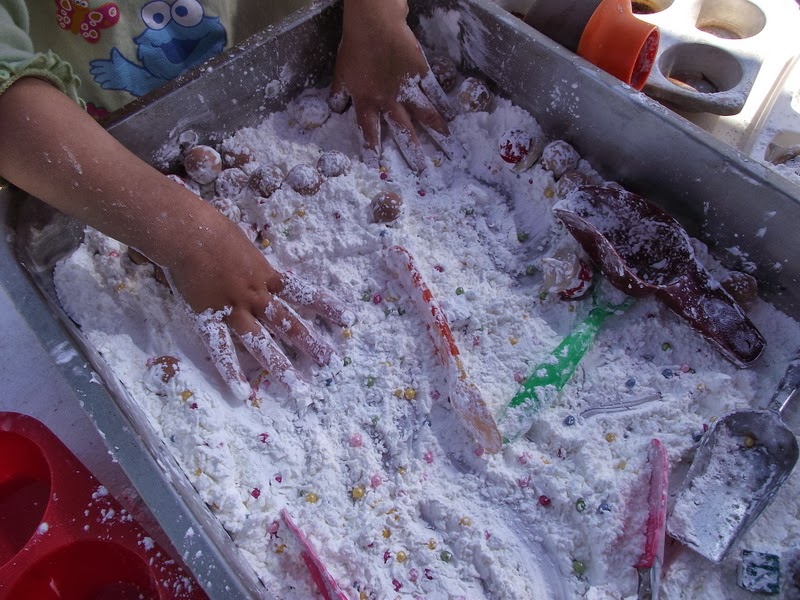 I suggested we play a game and asked the girls to find the coloured acorns. It was like a mini treasure hunt as they searched for the colours I called out and then deposited them into their trays….I then made it a little harder by asking them to find the colours of the tiny balls. 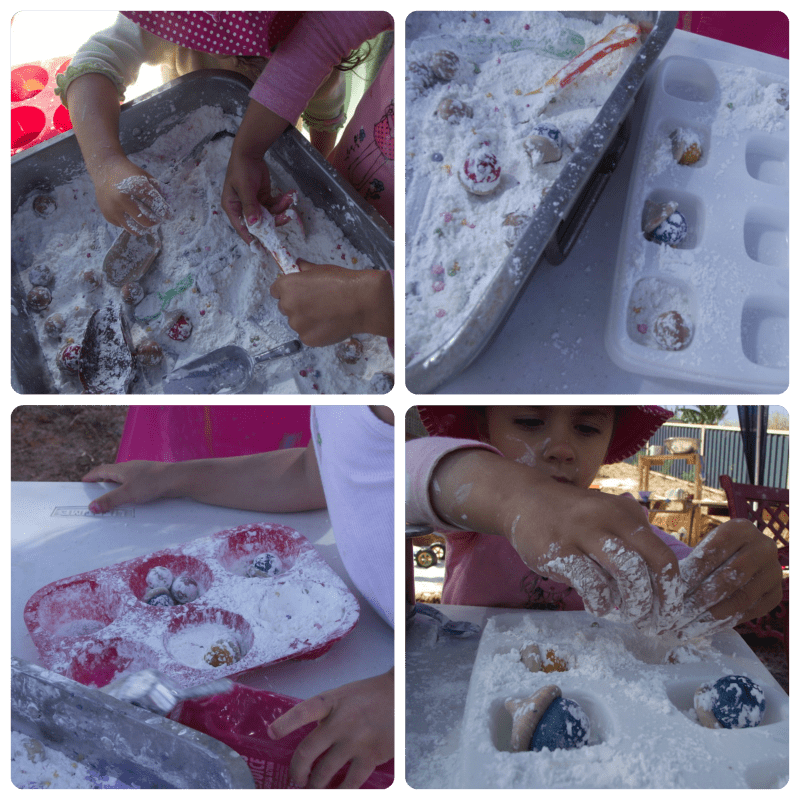 I added a few small scoops I found at the op shop and together with some muffin trays a whole new game began….making cakes. There was lots of fine motor practice happening as they transferred flour from the tray to the cake tins.
The scoops were also the perfect size for picking up the cedar balls out of the flour and placing into trays. 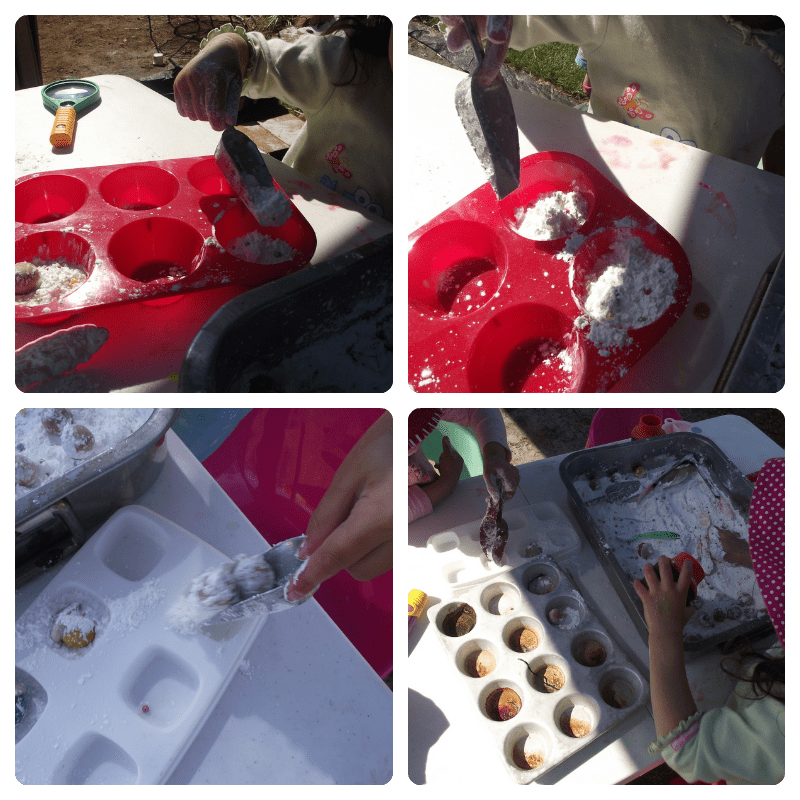 As they tired of the scoops I decided to extend the activity and challenge their fine motor skills further by introducing some small tongs to the tray…. 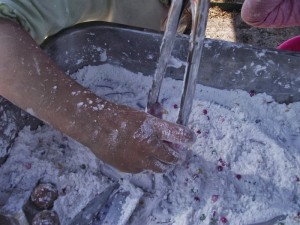 Ruby has been working hard on mastering the use of tongs and I could see her concentration and determination as she began to experiment. 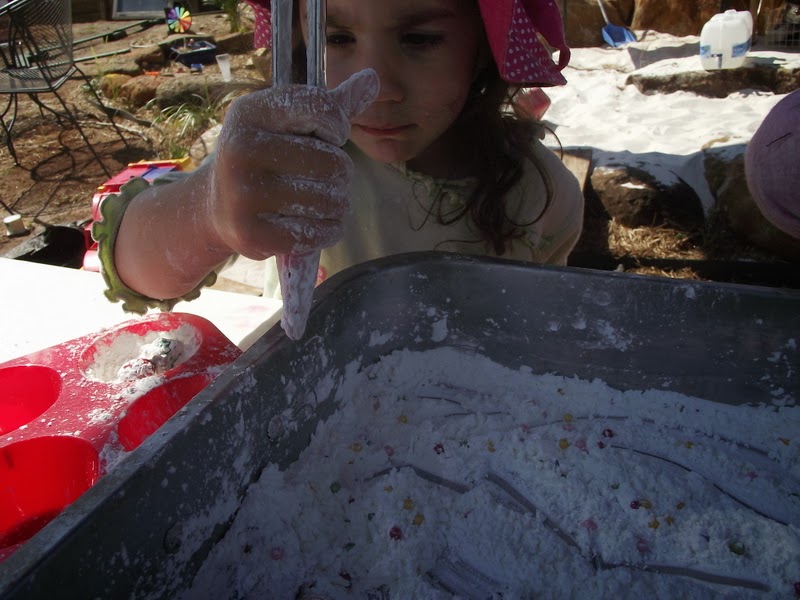 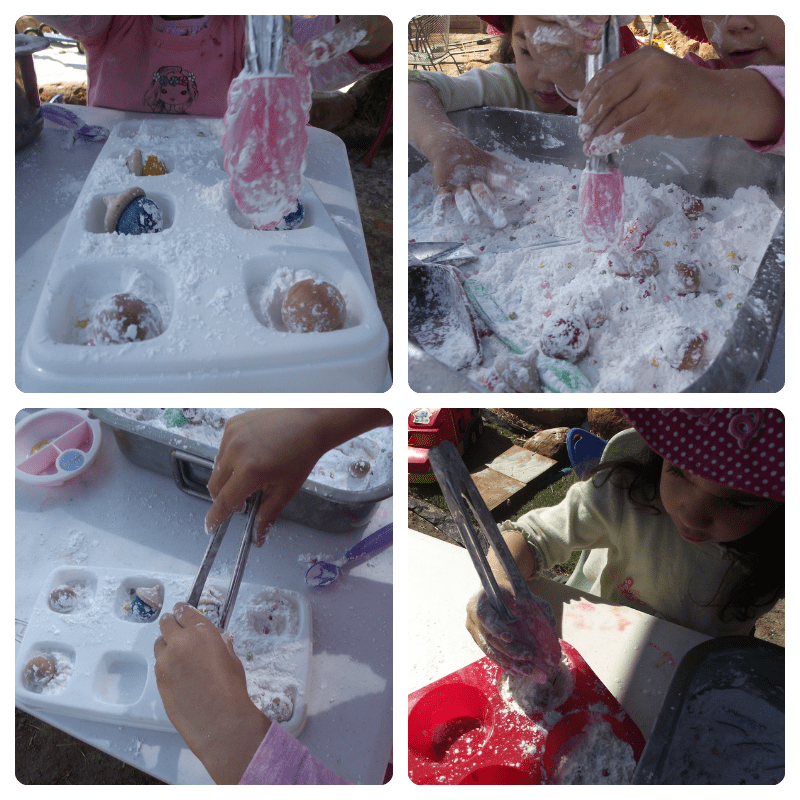 And also to make squiggly lines and patterns in the tray…. 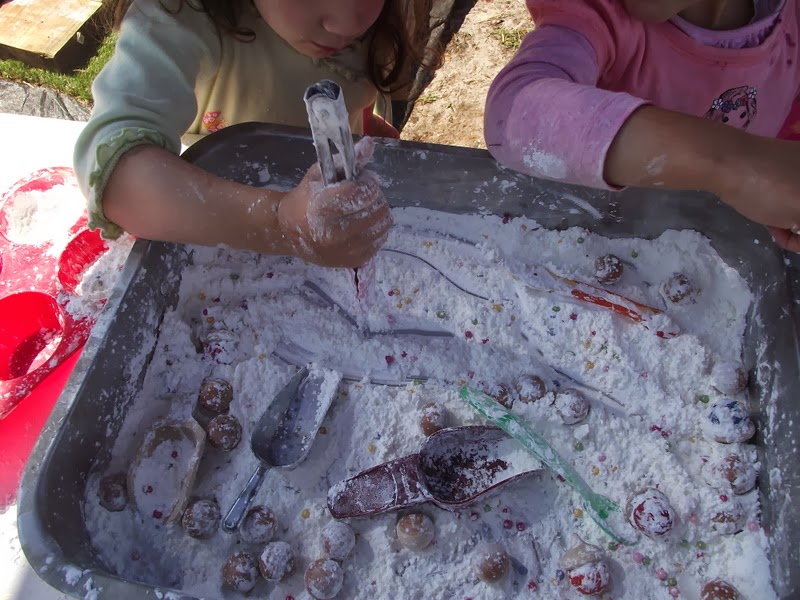 Of course,with any sensory play there had to be a little taste test…..after all, those balls are usually a treat when we are baking… 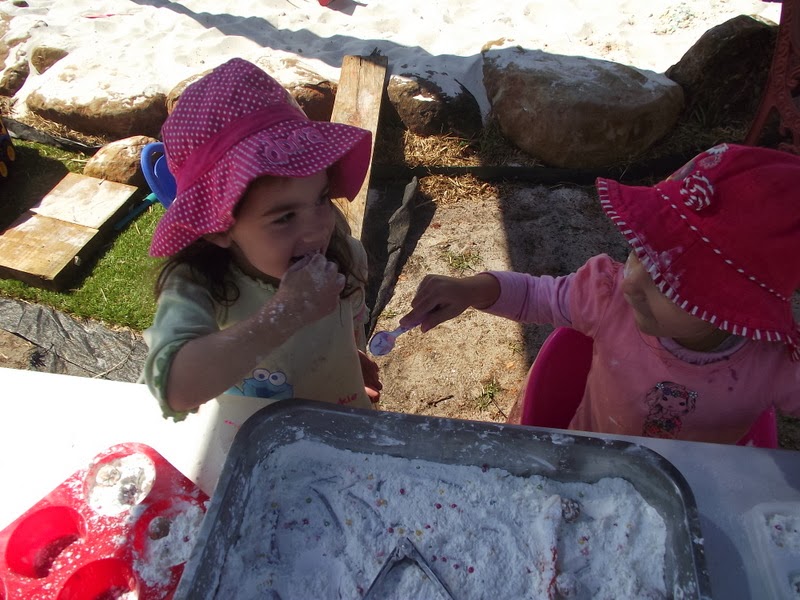 Apparently not quite as tasty when coated in cornflour…there were some funny faces pulled! 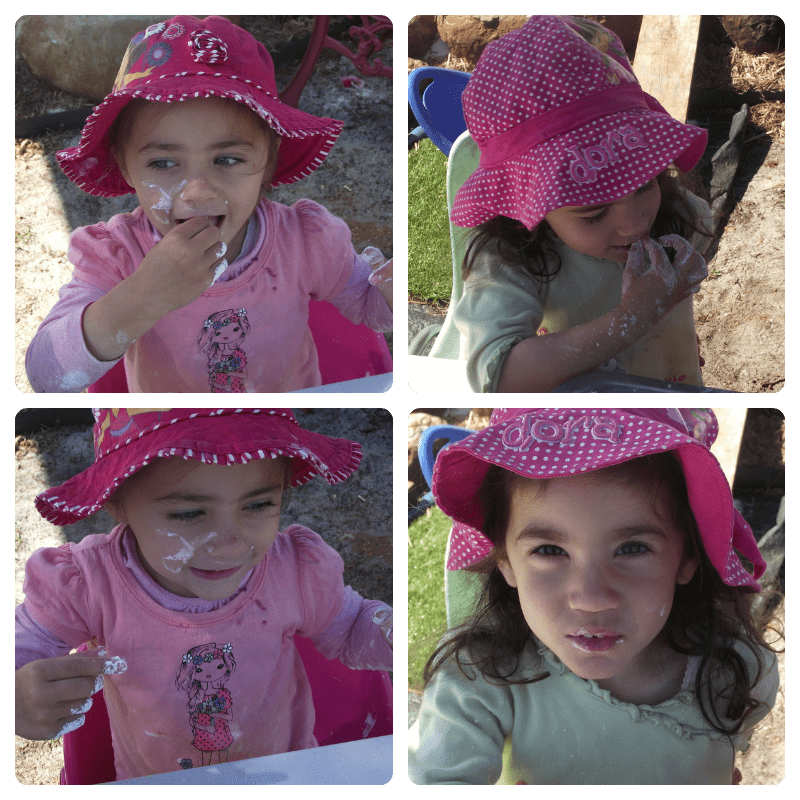 I just love this picture as it shows just how much fun they were having that day…which always makes me so glad I made the effort! 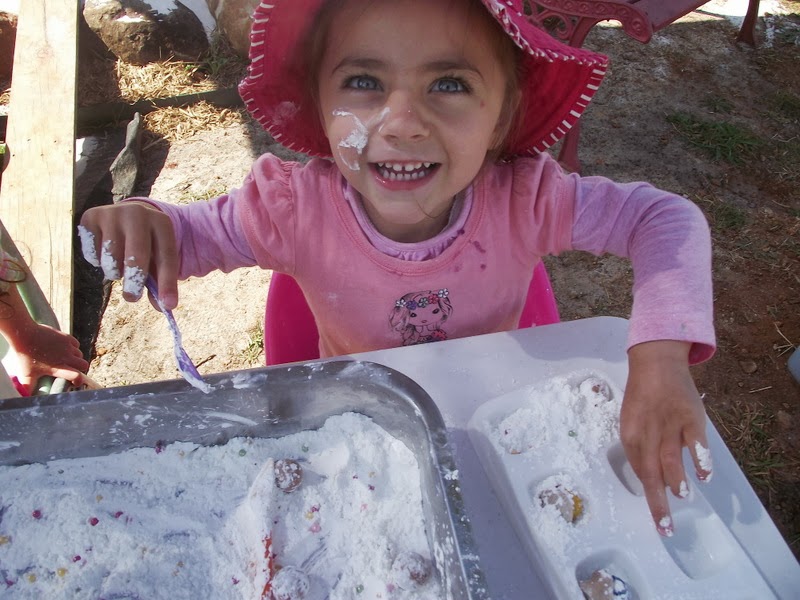 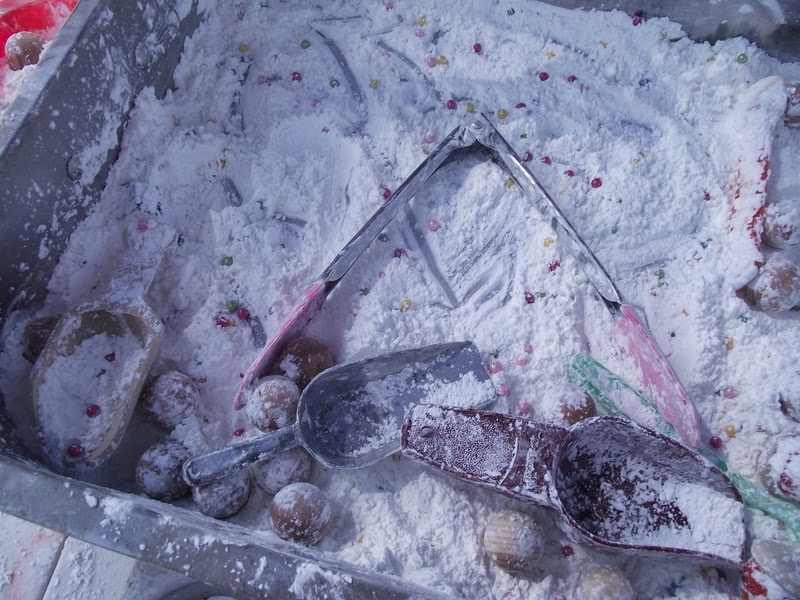 They were having so much fun I just didn't want it to end so I handed out the squirt bottles we had played with earlier in the week,. We often use these…you can read more about making them here. 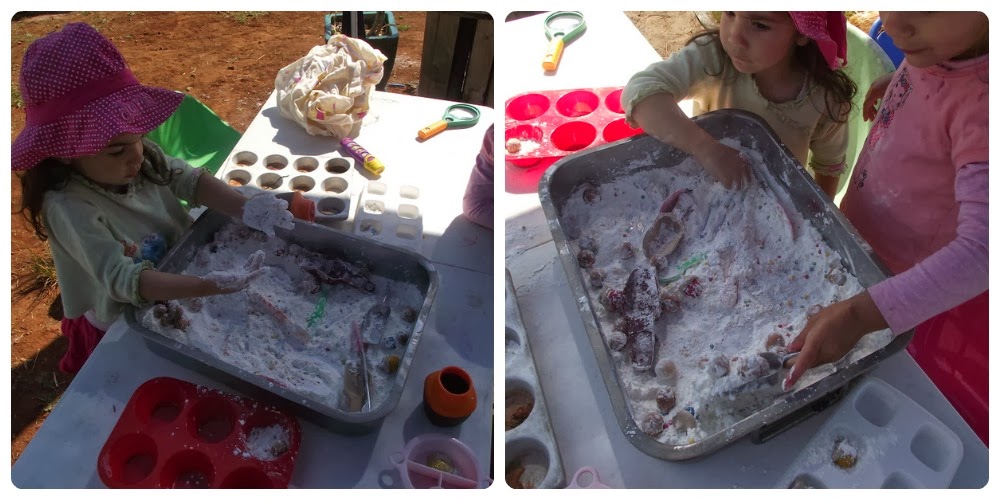 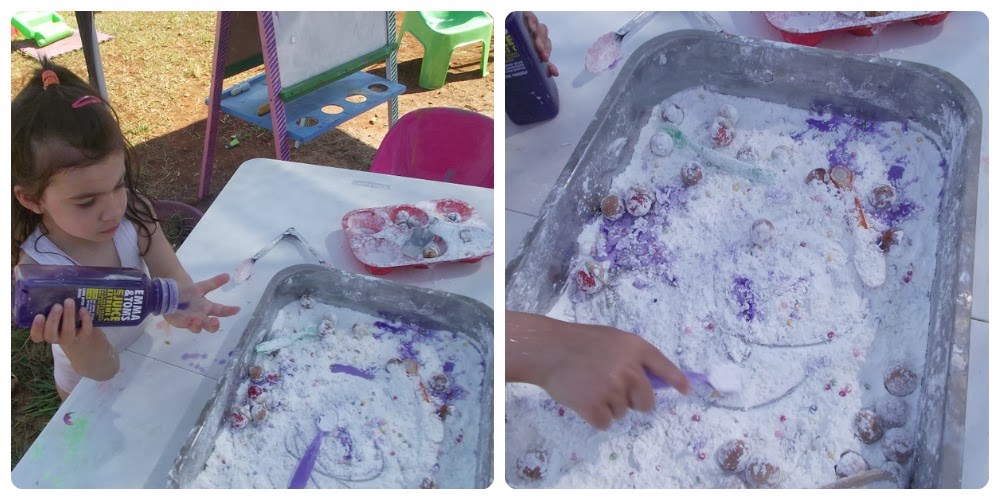 A little water always reinvigorates an activity immediately I think. By adding water to the cornflour the girls began to make a gloopy sensory material that had a whole new feel! 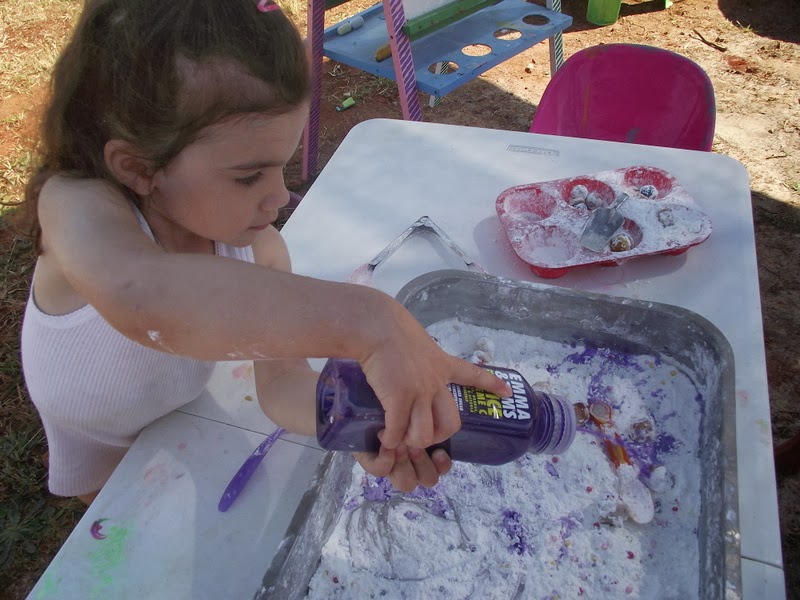 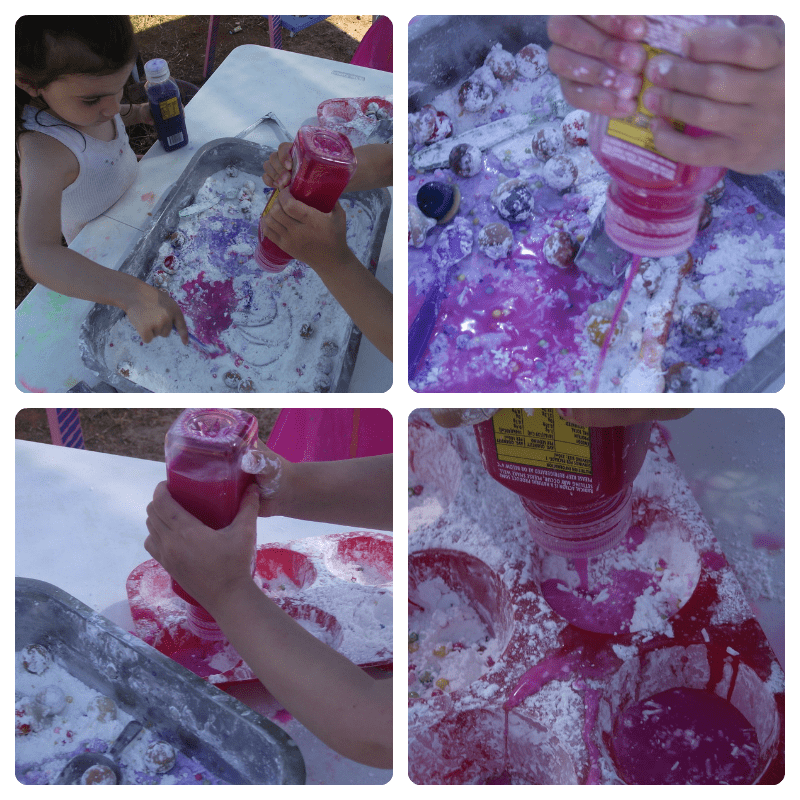 They ended up with a lovely gloopy mess that prompted discussion on how the flour was no longer soft and what had happened when the water was added. 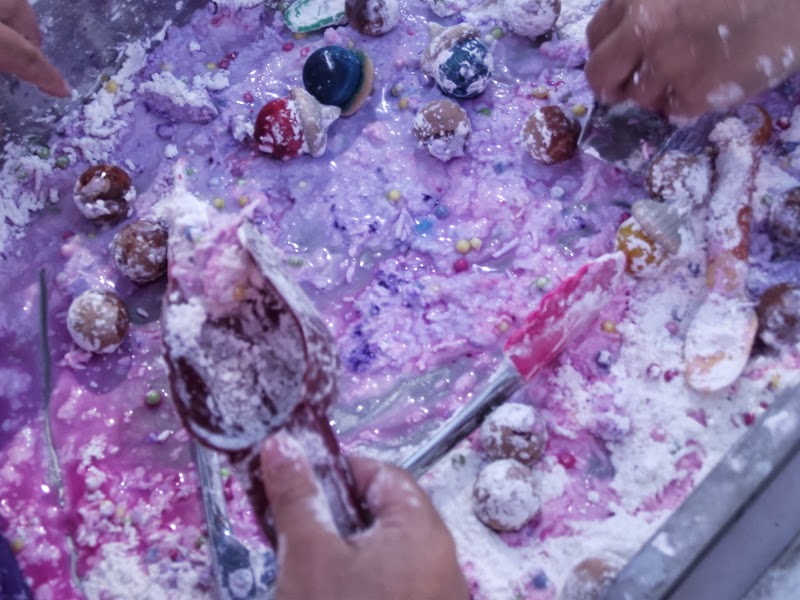 There were more cakes to be made, patterns to arrange and balls to squirt and colour…. 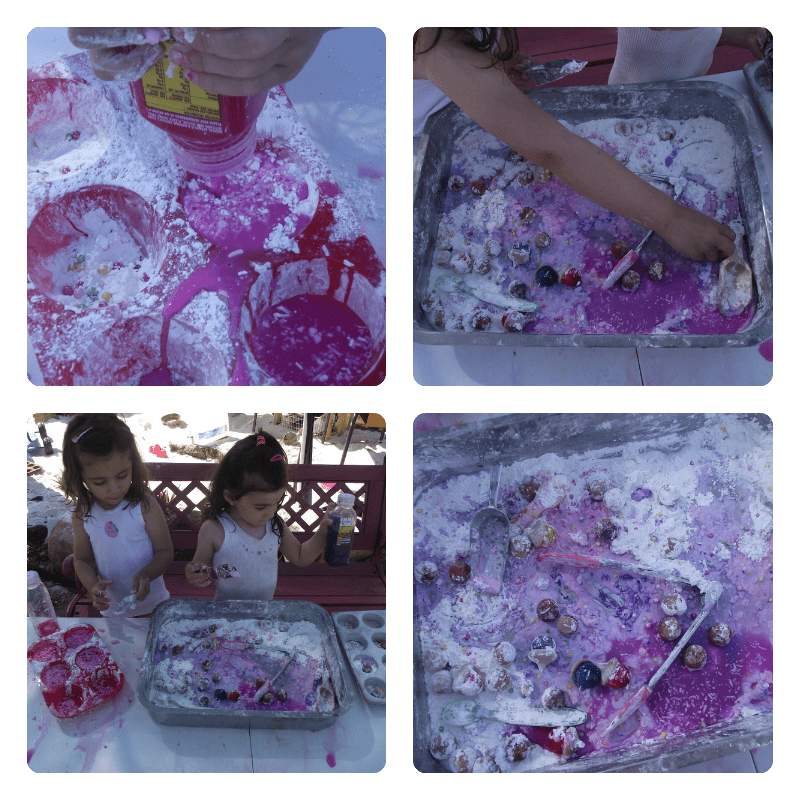 And when the sensory feel of the wet flour began to get to much for Ruby's sensory system and SPD difficulties she turned to the bucket of water I always have close by to wash those sticky, gooey hands….. 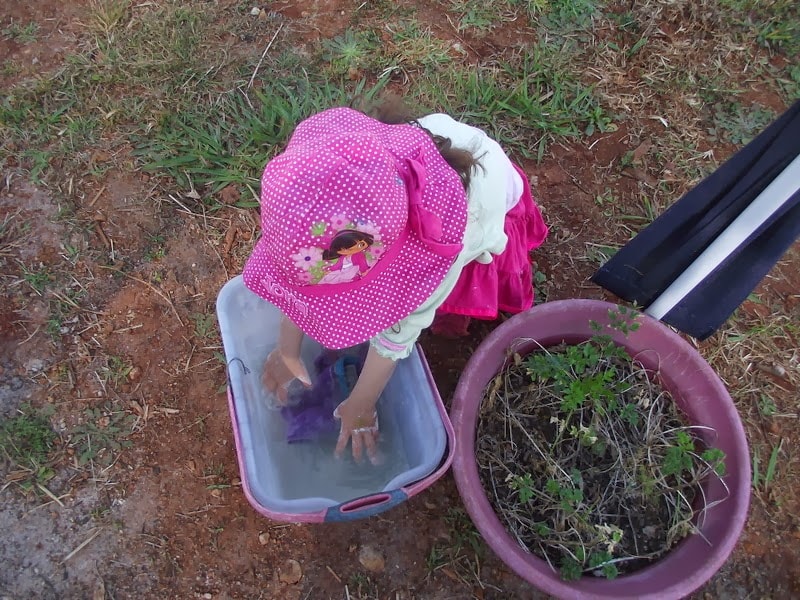 Which allowed her to start all over again! 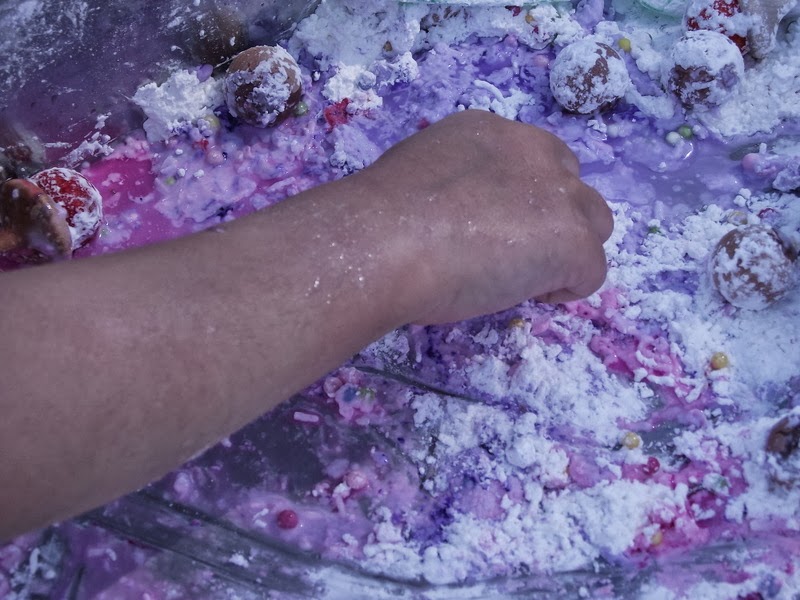 I think this activity lasted for about an hour by the time I kept adding new prompts. For very little effort and only a few basic materials I had an activity that presented many learning and sensory opportunities and was a whole lot of fun! I hope you give it a try with whatever materials you have available! 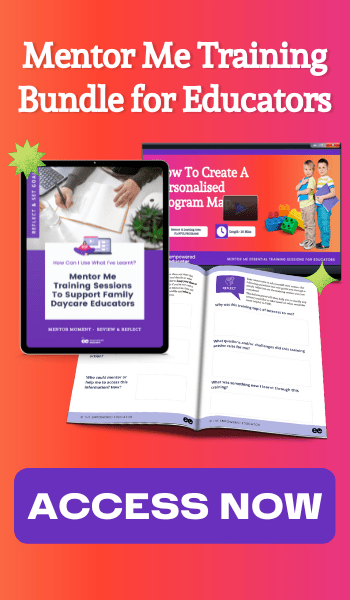